All Walls Must Fall is a Tech-Noir Tactics game. We have a thing for classic tactics games, and we’ve drawn a lot of inspiration from classics like X-Com, Fallout and Syndicate. We’ve created a tactical gameplay system that also mixes in time travel. This is one of the key fundamentals of the game and we’re happy with how it works, so in this post, I’m going to give an introduction to this aspect of the core gameplay – but if you need a general introduction to the game, check out our Kickstarter campaign first. 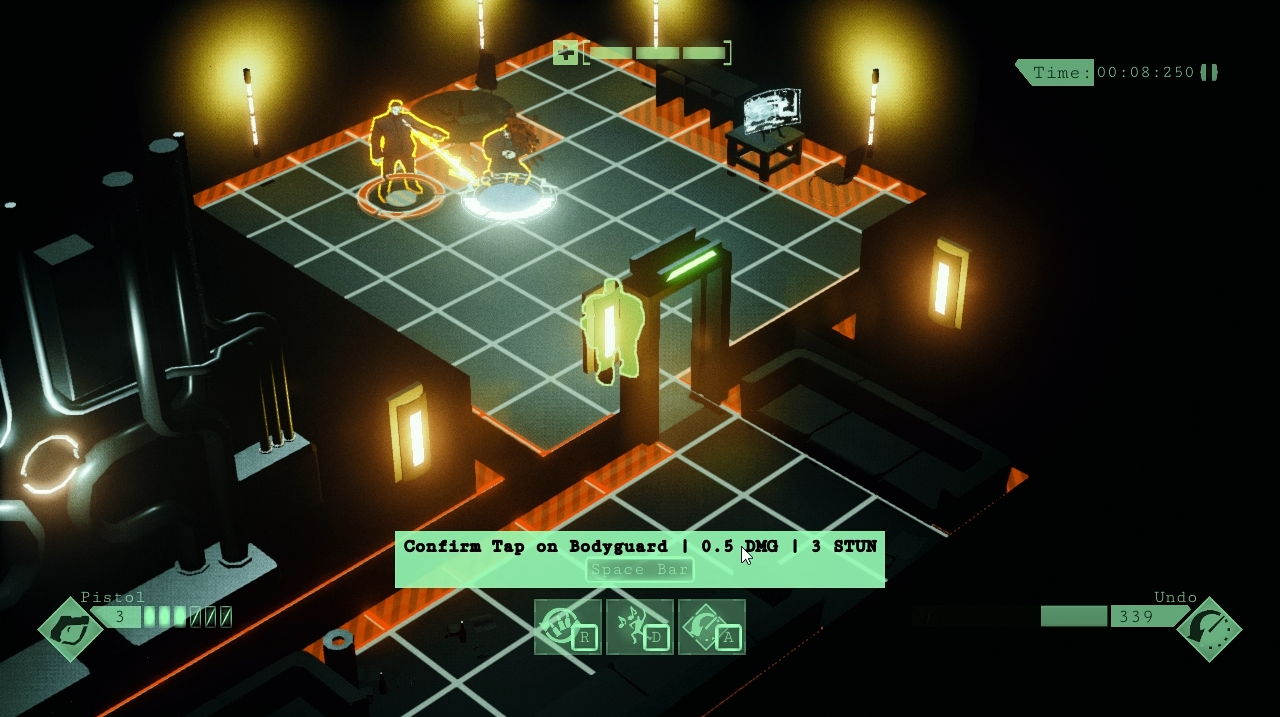 Time is at the core of All Walls Must Fall, and everything happens on the beat. However, as the game is played in pausable real-time, you the player don’t actually do things on the beat – this isn’t a rhythm game. As a tactics game, you need to choose the best course of action, and so the game is paused while you’re planning what to do. Once you select an action, the game unpauses, the action is carried out, and the game pauses again. To external observers, your agents appear to have incredible reflexes and decision making, but as time-travellers, they’re actually aware of this pausing of the clock.

Everything your agents can do is an action. Movement, shooting, opening doors, talking: all are actions. Each action has a duration, which is measured in beats of the music. Walking allows you to move one tile per beat, so an 8-tile move would take 8 beats. Agents can also dash, to double their speed while spending some resources, so the same move would only take 4 beats. Some actions are longer than others (like reloading), and while your agents are performing their actions, enemies, other NPCs, and the environment are all doing their thing at the same time. You can think of each beat as being like a turn, and all characters in the game take their simultaneous turns together.

So Kai’s just hanging in the club, looking for a quiet place to chill and totally not trying to find the owner’s secret warez stash or anything, and these goons get the wrong idea and think he’s busting into their private ‘meeting’. They pull their side arms and point them at his face. Now you’re in tactical mode. All the rules stay the same, but there are a few changes to the controls, with the biggest one being that now you confirm actions before they happen. This allows you to preview what you’re about to do, before you do it.

Kai managed to get a pistol past the weapon detector at the club entrance (he and the Bouncer go way back). The equipped pistol has two actions available: a quick tap to the body, or an aimed shot to the head. All weapons offer two different actions when equipped, meaning choosing your kit before heading into a mission changes what approaches are available in each situation.

The tap is fast, taking only half a beat, and stuns the target for 3 beats. However, it only does half a point of damage. That means it’ll take 6 taps to take down one target, emptying the pistol in the process.

That’s one down, but as we were busy shooting his buddy managed to get a shot in, and Kai lost one health, plus the pistol’s empty. Right now, your agents have 3 health, and the only way to regain health is to use your time abilities – there are no magic health packs that cure gunshots in All Walls Must Fall. We want combat to be tense, so losing even one health point can be a problem. Kai should be able to handle these two and come away unscathed: he’s a time traveller after all. So let’s use the Undo ability to go back in time to after Kai took the second shot. Using time abilities costs time points, which we show in the bottom-right. If your agent dies, you have the opportunity to undo that death – as long as you have time points. If not, it’s mission failed.

With one enemy stunned for a few beats, he’s not a danger at the moment. But his buddy has already taken a shot, and we know from our previous timeline that it will hit Kai in two beats. That gives us a window of opportunity: Kai can double-tap this second guard in one beat, at which point they’re both stunned. With one beat remaining before taking damage, a quick Dash move to the side gets Kai out of the bullet’s path. Following up with two aimed headshots, Kai’s the last man standing.

That concludes this combat. The game now plays The Drop, a sequence where the entire combat plays out in real-time from beginning to end. As everything happens on the beat, this creates a synaesthetic effect, where the sounds of your actions become part of the music. In this case, the double-tap-aimed combo creates a rhythmic element that becomes part of the percussion. This also gives us the opportunity to show you what “really” happened, from the perspective of the world around you. In the player’s timeline, there was the first attempt which got undone: nobody else in this timeline was aware of that though, and it’s not in the drop. For the Undo ability, this is pretty straightforward, but for some of our more advanced time abilities, it can get pretty mind-bending.

It seems these guys weren’t really relevant to the mission after all. Kai would rather just undo the whole combat and leave them be. Of course, he remembers what didn’t happen, and the fog-of-war in that room is still removed for you.

How we got here, and what’s next for Tactical Combat

Back when we were in pre-production in late 2015, we went through quite a few iterations of our core combat mechanics, with things like manual pausing, different rules when in tactical mode, as well as more experimental ideas like having each musical bar play out separately, or having the game constantly loop a few beats that you edit on the fly. We’ve been happy with our core mechanics for a while now, and what I’m presenting here will be unlikely to see drastic changes as we head into Closed Alpha. The UI is still a work in progress though: right now the health of the enemies is displayed on the circles under their feet, and we’ll probably move over to a more traditional display with bars above them instead. The confirmation button is a relatively new addition that went in after we got playtest feedback in the last couple of months, and that will be reworked to display information more cleanly with some of Rafal’s lovely icons. We also have an extended cover system planned and funded, as it was part of our Kickstarter campaign‘s first Stretch Goal, VANDALISM: 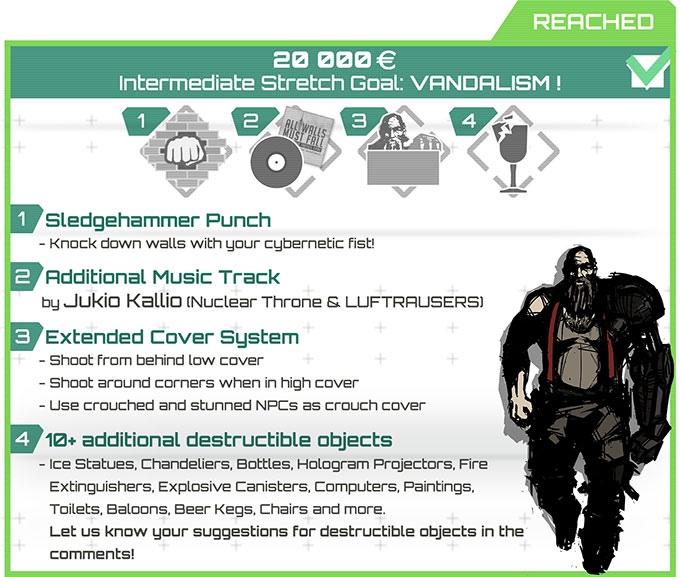 This scenario was one of the simplest you’ll come up against in All Walls Must Fall. In an upcoming post, I’ll be covering advanced time travel abilities like the Rewind and Trace-Back, as well as how to predict the future.

This site uses Akismet to reduce spam. Learn how your comment data is processed.